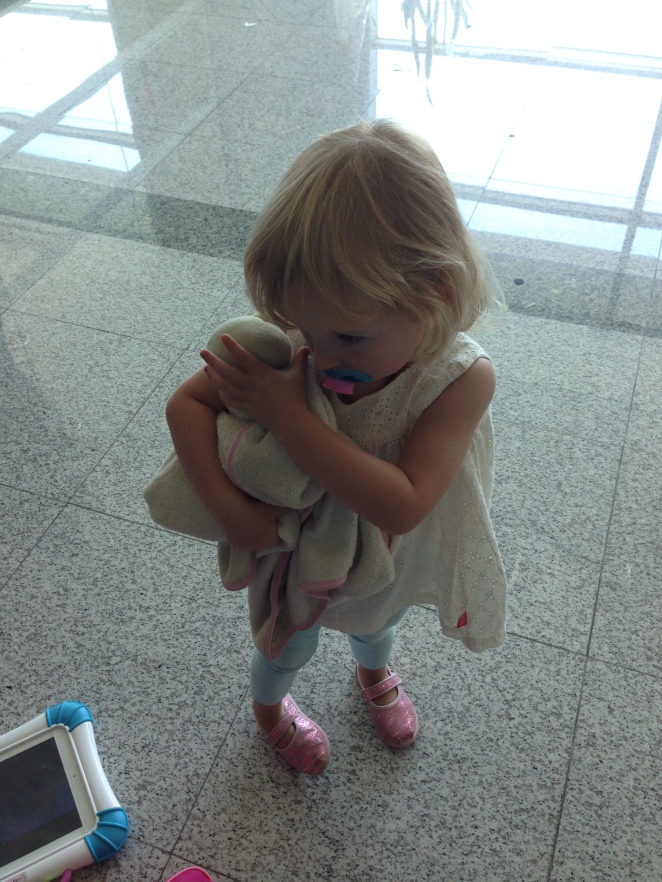 I swore I was never going to be one of “those” parents. “My child will never have just one blanket they become so attached to we can’t do anything without it!”

My tiny human now has 2. Her “Duckie” and her “Blankie”. They are 4 years old, one of a kind items. They have come with us wherever we go, and yes, we (as any parents who’s child has one has felt) have gone through the sheer panic of when they have been misplaced for longer than 30 seconds, but the have simply become part of our little family.

I was looking back on photos recently of when she was a tiny baby, and looking at the pics, 2 things seemed awfully similar… there was Duckie… and there was Blankie, in each and every pic of her asleep during her first year. I realised that day, it wasn’t my tiny human’s fault that she had become so attached to these two items, it was in fact…. Mine. Every time she got sleepy I gave them to her. Every time she got sad, I gave them to her. The same blanket, the same duck.

I remember I even spent a couple of months, as she got older (and they got more worn), searching for replacements. To no avail. I did find one ducky in America somewhere on eBay, but couldn’t justify spending $70 on shipping (I almost did, almost…) but then realised if I did try to replace them, they just wouldn’t have the same meaning. These two pieces of material have travelled on every overnight trip we’ve ever gone on.

I did however give in on day just before Christmas. We went into town on the Luas and I decided to let her bring them. Biggest mistake of my life. as we were on our way home, we were comfortable on the Luas, and I looked out the window to get lost in my thoughts of our wonderful day in town… there was blankie, just lying on the pavement, all alone beside the ticket machine. In that moment I made the stupidest decision of my entire life. I left my tiny human, on the Luas, while I jumped off and grabbed it (it was a split second, and it was just outside the door, in my defence). Yes, the doors could have shut with her on it and me not. Yes, I had to suffer the judging eyes of those who realised what I had just done, but the alternative seemed so. much. worse.

The funny thing is, deep down, I know for a fact that one night without either of these items, and she will survive it. And the night after, she may mention them once or twice, but she will still go to sleep. And by the 3rd night, she probably won’t mention them at all… SO I have begun to realise, that not only is she attached to “Duckie & Blankie”, I have grown to be just as attached to them too. I have also come to realise that it isn’t such a bad thing, to have items that make you feel comfortable, that make you feel safe, that help you sleep better. That’s exactly what they do for her, and as long as we find the balance (and not suffer heart failure if they get mislaid) then there is absolutely nothing wrong with it. So as much as people say “I can’t believe she’s 4 and she is still attached to those”… I’m secretly saying to myself.. “If only you knew, I’m 35… and I’m probably more attached to them than she is” 🙂